I got the Christie bug again in August and found myself reading four of her books, including my first Ms Marple book. Here are the reviews for those books: 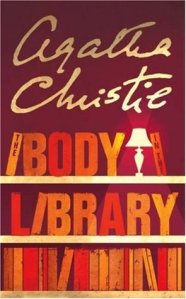 The Body in the Library

Colonel Bantry has found the strangled body of an exotic blonde bombshell lying on his library hearth – and the neighbours are beginning to talk! When Miss Marple takes an interest, though, things begin to move along nicely, and its all far more convoluted – and sordid – than the genteel Bantrys could have imagined.

A curmudgeonly financier, his self-absorbed adult children, a couple of pragmatic and clever hotel workers, tons of money and influence, a wild local lad, some smitten girls, the film business, mix into a classic Christie plot filled with twists, turns, and double-backs galore. Plus the glorious settings of A Great House, a fancy Hotel, and an excessively genteel little village, and let’s not forget Miss Marple.

This was my first Miss Marple and it was excellent. I really did love the character of Marple. How she used her local knowledge of the village and its community and applied it as anecdotes to the case at hand to help the police figure out who was acting and why. I also loved the actual theme Christie was tackling in the book. The prologue is amazing. Written by Christie she is basically going oh you know that old trope I am about to turn it on its head, and she does. The phrase “A body in the Library” is repeated seven times in the first three pages just to emphasise her point. In classic Christie form she builds layers upon layers to the mystery and leaves you guessing at every turn.

The Murder of Roger Ackroyd

In the village of King’s Abbot, a widow’s sudden suicide sparks rumours that she murdered her first husband, was being blackmailed, and was carrying on a secret affair with the wealthy Roger Ackroyd. The following evening, Ackroyd is murdered in his locked study–but not before receiving a letter identifying the widow’s blackmailer. King’s Abbot is crawling with suspects, including a nervous butler, Ackroyd’s wayward stepson, and his sister-in-law, Mrs. Cecil Ackroyd, who has taken up residence in the victim’s home. It’s now up to the famous detective Hercule Poirot, who has retired to King’s Abbot to garden, to solve the case of who killed Roger Ackroyd–a task in which he is aided by the village doctor and narrator, James Sheppard, and by Sheppard’s ingenious sister, Caroline.

The Murder of Roger Ackroyd is the book that made Agatha Christie a household name and launched her career as a perennial bestseller. Originally published in 1926, it is a landmark in the mystery genre. It was in the vanguard of a new class of popular detective fiction that ushered in the modern era of mystery novels.

This may be one of the best Christie Novels I have read. The twist completely threw me I had no idea and that was all down to Christie’s writing. She wasn’t afraid to go new places that no one else had and it makes for a great read. In fact this book probably was a solid 3 star Poirot mystery until her twist in the last 4 pages of the book that skyrocketed it to 5 stars. It just proved why this was the book that made her a best seller. Those last few pages took you on such a journey that you almost wanted to go back to re-read the whole thing just to see if you could possibly find the clues. I had a copy with an afterword that has the same sentiments and I couldn’t agree more.

The Mystery of the Blue Train

A mysterious woman, a legendary cursed jewel, and a night train to the French riviera — ingredients for the perfect romance or the perfect crime? When the train stops, the jewel is missing, and the woman is found dead in her compartment. It’s the perfect mystery, filled with passion, greed, deceit. And Hercule Poirot is the perfect detective to solve it.

This was another solid mystery for Poirot. It was a fun read with all the pieces sliding into place before the reader and an awesome reveal of the actual killer after revealing the different motives for everyone of the train. Predating Murder on the Orient this was the original Poirot Train based mystery and was just as fun. 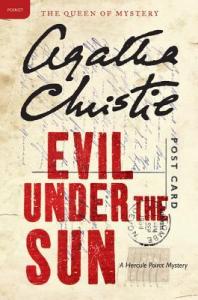 Evil under the Sun

Set at the Jolly Roger, a posh vacation resort for the rich and famous on the southern coast of England, Evil Under the Sun is one of Agatha Christie’s most intriguing mysteries. When a gorgeous young bride is brutally strangled to death on the beach, only Hercule Poirot can sift through the secrets that shroud each of the guests and unravel the macabre mystery at this playground by the sea.

This was a fun one. In usual Poirot fashion he was in the right place at the right time and even why on holiday he can’t help but get entangled in the mystery of the moment. I genuinely enjoy the process that Poirot goes through to solve each of these mysteries and how we are teased at possible suspects, bits of evidence and finally given a reveal that is usually unpredictable.

One thought on “Christie Challenge update”