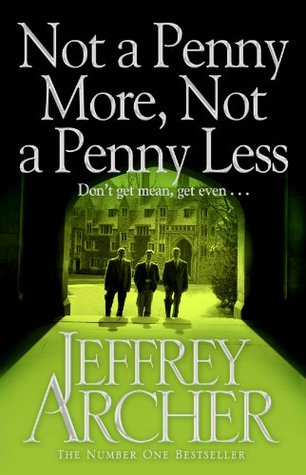 From Goodreads: The conned: an Oxford don, a revered society physician, a chic French art dealer, and a charming English lord. They have one thing in common. Overnight, each novice investor lost his life’s fortune to one man. The con: Harvey Metcalfe!!

*A brilliant, self-made guru of deceit. A very dangerous individual. And now, a hunted man. *

With nothing left to lose four strangers are about to come together-each expert in their own field. Their plan: find Harvey, shadow him, trap him, and penny-for-penny, destroy him. From the luxurious casinos of Monte Carlo to the high-stakes windows at Ascot to the bustling streets of Wall Street to fashionable London galleries, their own ingenious game has begun. It’s called revenge-and they were taught by a master

This was a re-read for me but it has been a good decade or two since I first encountered this story. Originally, I listened to the audiobook of this with my parents and was captivated but that’s all I truely remember. That became truly evident when I picked up this book for Re-readathon. It is so hard to review without giving away spoilers. It is such an exciting and dynamic read where the plot is so intense that the pages just fly.

There are a couple of caviates to my gush, occasionally the writing style was detrimental to the reading experience. In an effort to show action in some of the scenes the perspective switches dramatically with no indication so that occasionally became confusing and I found myself going back to establish which character we were following. Many of the characters are quite stereotypical there Frenchman, is a ladies man, the English Dr is stuffy etc. There are a number comments that are misogynistic and distasteful in this day and age, but this was written in the 80s, with respect to other recent reads of mine, the comments are fairly harmless just in poor taste.

Other than those reservations I thoroughly enjoyed this read. We are treated to not just one heist but five! Each with their own plot and intrigue that we get to see unfurling over the course of the book. It is just filled with laugh out loud moments, tense moments and moments where I audibly gasped (gaining me very odd looks on the train). I also loved the found family aspect and the friendship that formed between the main characters. They all played off of each other so well bringing out the humour. The reader is kept on their toes all the way through and that ending! Again, the twists just keep hitting us down to the very last line, leaving me with a great big grin on my face.

It’s that that makes this book high on the rating list. I didn’t want to put it down, I was dragged away with the tension of each heist, then thrown by the twists and I laughed along with the characters. If you are looking for a great caper I would recommend this read.