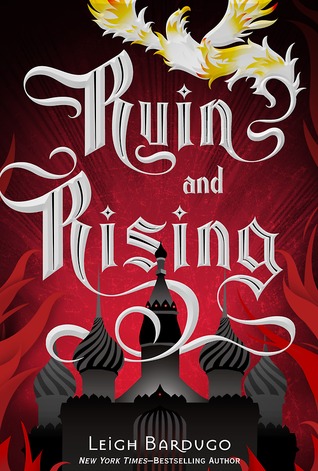 The capital has fallen.

The Darkling rules Ravka from his shadow throne.

Now the nation’s fate rests with a broken Sun Summoner, a disgraced tracker, and the shattered remnants of a once-great magical army.

Deep in an ancient network of tunnels and caverns, a weakened Alina must submit to the dubious protection of the Apparat and the zealots who worship her as a Saint. Yet her plans lie elsewhere, with the hunt for the elusive firebird and the hope that an outlaw prince still survives.

Alina will have to forge new alliances and put aside old rivalries as she and Mal race to find the last of Morozova’s amplifiers. But as she begins to unravel the Darkling’s secrets, she reveals a past that will forever alter her understanding of the bond they share and the power she wields. The firebird is the one thing that stands between Ravka and destruction—and claiming it could cost Alina the very future she’s fighting for.

As this is the third in the series and I try not to give spoilers in my reviews there is not much I can say over and above what I have said about both books one and two. I really did enjoy this instalment. While there was a lot of elements similar to the previous books, the continual capture of the main characters, escape with some help, rinse and repeat elements were there in abundance. I actually rather liked a number of these predicaments and they did escape from them in some interesting ways.

I felt we got to connect with Alina a lot more and that she really came into her own over this book. Even Mel grew on me a little. I wish there was more exploration of the Darkling but I have wanted that in every book in this series. The inclusion of other Grisha members was a BIG! Plus in this book, we really got to know them a bit more and I loved that.

This story was satisfying conclusion to the series. The plot twist was predictable but I was so swept up by the writing that I didn’t really care I had saw it coming since book one. I think that is the beauty of Bardugo’s writing it just kind of makes you want more. I love that I know there is more of Nickoli in King of scars and that I can follow this world and learn more about it in Six of Crows. Overall, I really enjoyed this series and can’t wait to keep going in the Grishaverse.