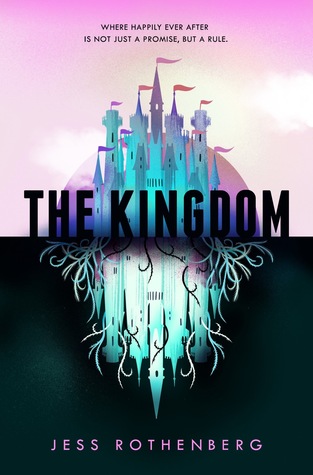 I received a free eARC copy from Pan Macmillian , via NetGalley in exchange for an honest review. All opinions are my own.

Welcome to the Kingdom… where ‘Happily Ever After’ isn’t just a promise, but a rule.

Glimmering like a jewel behind its gateway, The Kingdom™ is an immersive fantasy theme park where guests soar on virtual dragons, castles loom like giants, and bioengineered species―formerly extinct―roam free.

Ana is one of seven Fantasists, beautiful “princesses” engineered to make dreams come true. When she meets park employee Owen, Ana begins to experience emotions beyond her programming including, for the first time… love.

But the fairytale becomes a nightmare when Ana is accused of murdering Owen, igniting the trial of the century. Through courtroom testimony, interviews, and Ana’s memories of Owen, emerges a tale of love, lies, and cruelty―and what it truly means to be human.

Sometimes a book just comes a long that hooks you from the beginning and pulls you in so that you just never want the pages to stop turning. This was one of those books. I truly liked all there was to like about this book.

Both the plot and the setting were both so imaginative. We follow an ongoing court case against the Kingdom corporation with witness interviews and evidence transcripts, all intermingled with flashbacks told from Ana’s perspective. This paints a fantastic picture of a magical park where everything is perfect, aiming to preserve what the outside world is loosing as it descends into a diplopia. The park acting a beacon of happiness to everyone. As we learn more about the park through Ana’s eyes we reveal a sinister undertone that lends itself so fantastically to all the twists and turns of this murder mystery. The switching formats build up amazing suspense but also allow for plot twists to come out of nowhere giving this book its un-put-down-able quality. Rothernburg’s writing is fantastic capturing all the different tones, from court room drama, cheesy advertisement campaigns to classic ‘Princess’ rhetoric. There is just so much depth and layer upon layer that unfolds. She brings together picture perfect fairytales, mystery thriller with dashes of distopian fiction into an amazingly entertaining read.

The characters are also amazing, Ana is awesome as we learn with her as she tries to establish where she fits in the realm of AI or Human, programming vs free will, emotion vs algorithm it really allows the world and the plot to be full fleshed out without any info dumping. The side characters are also multifaceted, twisting and turning as the fairytale breaks down and exposes its sinister side. All in all it just makes for a truly fantastic read.

There were a few points where I wish the relentless pace would slow and let us savour some of the twists a little longer in order to fully process them. But that is my only complaint. The ending itself was a little open ended, giving us a big reveal which was not fully resolved but i just hope that means we are going to get more from this world.

2 thoughts on “ARC Review – The Kingdom”