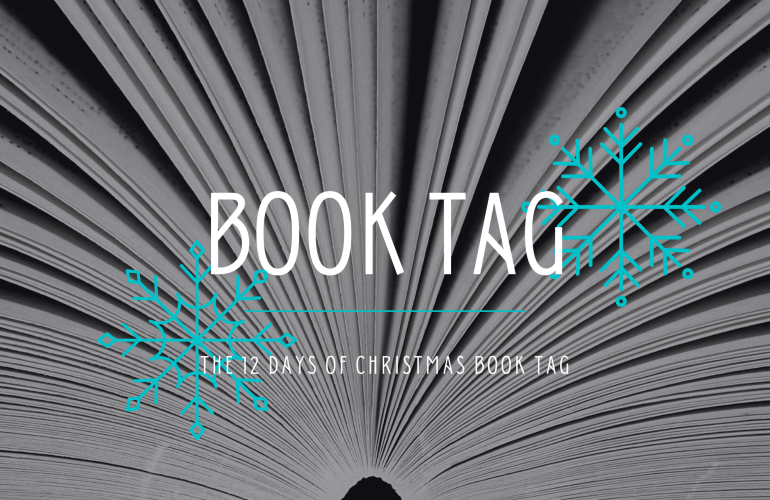 I am squeezing in another Festive book tag today. The holidays are marching closer and closer and with only one week left at work till I am officially on Annual leave for the remainder of the year! I am very much looking forward to my time off and catch up on all my reading.

I was tagged by Ellie at Read to Ramble  it was originally created by Lizzie Loves Books. It has also been done by two of my awesome Blogging Buddies Danni from For Books Sake  and  The Book Dutchesses so I encourage you to go read there answers too!

This tag is based around the song 12 Days of Christmas with each of the days representing a book. These are some really difficult questions but I am going to try and select just one book or series for each of the answers even though I could pick 5 or six for each. I don’t want to spoil my 2020 wrap up posts too much!

ON THE FIRST DAY OF CHRISTMAS, MY TRUE LOVE SENT TO ME: A PARTRIDGE IN A PEAR TREE.

The partridge stood alone in the pear tree. What is your favourite stand alone?

The Space Between Worlds
Micaiah Johnson

There are not a lot of standalone’s on my shelves. Being a primarily Science Fiction and Fantasy reader my shelves are filled with trilogies and series that pull you into the worlds. This book stands out in the crowd for pulling you into amazing world building and story with just a single book. There is so much packed into this read and its just amazing. I was so lucky to get an eARC copy and you can read my full review HERE it is definitely one I want to re-read and I will be looking out for more from this author.

ON THE SECOND DAY OF CHRISTMAS, MY TRUE LOVE SENT TO ME: TWO TURTLE DOVES.

Love is in the air! Who is your one true pairing?

This is one of my favourite series and I have to admit I love Peter and Beverly’s relationship. He is one of the only officers in the Metropolitan Police to be part of the Folly which are practicing wizards that deal with all matters of the ‘uncanny’, she is the physical embodiment of a River in Southwest London that is a tributary to the River Themes, they are a perfect match. There relationship just feels a lot more natural that other fantasies. There was a little will they wont they but there was no real drawn out angst, they just started dating and became a couple in a very realistic fashion. I like how were have got to see there relationship progress throughout the books and with them having a family in book 7 its nice to see how Peter had matured over it all. I know a lot of people’s OTP in this book was Peter and Lesley but I much prefer Peter and Beverly together.

ON THE THIRD DAY OF CHRISTMAS, MY TRUE LOVE SENT TO ME: THREE FRENCH HENS.

In the spirit of threes, what is the best trilogy you have read?

Its actually quite hard to find a trilogy on my shelves, at least one that has not then been expanded and extended into further books or trilogies. I will admit I have not quite finished this one I am just at the start of book three but I can tell already I am very much going to enjoy this book and the trilogy as a whole. I am very glad to have got my hands on the Illumicrate editions as they are gorgeous and this really is a trilogy worth reading.

ON THE FOURTH DAY OF CHRISTMAS, MY TRUE LOVE SENT TO ME: FOUR CALLING BIRDS.

Since series usually consist of four or more books, what is your favourite series?

Do other bookworms just have one favourite series? I honestly have never been able to choose a favourite. I want to pick them all but as I have already mentioned one (River’s of London) and I am using a few other of my favourite in other answers I thought I would pick a favourite series I haven’t used in this tag and that is Old Man’s War by John Scalzi.

This is the book that re-kindled my love of Sci-fi after trailed away from reading during my university career. I love Scalzi’s humour and his way of depicting humanity in his work. Also alot of his books focus around consciousness and what that means to being human and I find all of that very interesting. This series is great. It has the initial trilogy, a YA novel that follows one of the teenage side characters during the events of book three, and two short story collections that follow some of my favourite side characters from the trilogy.

ON THE FIFTH DAY OF CHRISTMAS, MY TRUE LOVE SENT TO ME: FIVE GOLDEN RINGS.

One ring to rule them all! Who is your favourite Villain/Antagonist?

Confession I have only read books one and two in this chonky trilogy but boy do I love to hate Prince Regal. None of the characters in this series are innocent or necessarily good people but Regal is just a toad. There is something so inherently nasty about him that I just love to hate him. I love to see Poor Fitz (who has a horrible time through 95% of the books) get one over on Regal. Unfortunately where I left off on the series did not leave Fitz in a good place with Regal holding a lot more power than anyone should give him! I really need to read on.

ON THE SIXTH DAY OF CHRISTMAS, MY TRUE LOVE SENT TO ME: SIX GEESE A LAYING.

Creation is a beautiful thing. What is your favourite world/world-building?

The Library of the Unwritten
A. J. Hackwith

The Library of Hell #1

This book isn’t talked about all that much but it has amazing world building. It is focused around the Library of Unwritten books in Hell. Its where all the sparks of ideas for novels and all the half finished manuscripts go to live out there days in hopes of being completes on day. We also don’t only get one depiction of the afterlife but several including lyrical jousting in Valhalla which demonstrates words can be deadly. I am eagerly awaiting the second book in this series which is not out in the UK until 2021

ON THE SEVENTH DAY OF CHRISTMAS, MY TRUE LOVE SENT TO ME: SEVEN SWANS A SWIMMING.

If you know anything about me you know I am a sucker for an animal sidekick especially if they are a bit sarcastic and or sassy. i have quite a few on my list but my favourite has to be Mogget. I loved Mogget so much I named one of my Cats after him. He is such a sassy and fun character, waking up just in time to give epic levels of sass to the main characters before settling back down for another snooze. My Mogget is not much different to be honest even if he does try and look innocent.

ON THE EIGHTH DAY OF CHRISTMAS, MY TRUE LOVE SENT TO ME: EIGHT MAIDS A MILKING.

Milk is so 18th century. Which book or series takes beverages/food to a whole new level?

Kingdom of the Wicked
Kerri Maniscalco

I have to admit I was not a big fan of this book. I found the story line rather boring and drawn out with a rather lack lustre and predictable romance. In fact its only saving grace was the descriptions of the Italian food cooked at the MC’s parents restaurant. I did find it a bit preposterous when it claimed the MC invented Bruschetta but the description of all the ingredients did have me craving a good hearty Italian meal.

ON THE NINTH DAY OF CHRISTMAS MY TRUE LOVE SENT TO ME: NINE LADIES DANCING.

Dancing is just one skill of a Lady! Who is your favourite kickass female lead?

Ok Max might get herself into trouble up and down the timeline but so do all the other staff members at St Mary’s institute of Historical Research in Contemporary time. Max unlike some others also had the great talent of pulling them all out of trouble too. I really love her as a character. I love how resilient she is, how smart and funny and loving she is. This is just a great whirlwind of a series. with the 12th book in the series on the horizon, countless number of short stories and two spin off novels as well there is lots of Max’s adventures to read about.

ON THE TENTH DAY OF CHRISTMAS MY TRUE LOVE SENT TO ME: TEN LORDS A LEAPING.

How about your favourite leading lad?

Kellen does start off this series as quite a whiney your teenage boy, but De Castell is anything but kind to him throughout this six part series and he is grows into quite the likable character as we follow his life, adventures and relationships as he goes from petulant teenager to young man. I really grew to like him. In fact I love the trio of Kellen, his sassy Squirrelcat Reichies and his flaky mentor Ferius Parfax. I was delighted when it was announced we are getting a prequel about Ferius in the new year. This series has some epic worldbuilding that I am keen to return too.

ON THE ELEVENTH DAY OF CHRISTMAS MY TRUE LOVE SENT TO ME: ELEVEN PIPES PIPING.

What is your favourite book or bookish thing with musical influence? (It can be about music, reference music a lot etc.)

I know I have mentioned Rivers of London before in this tag and I was trying to vary up the books I write about but there really are not as many books on my shelves with musical influence as I would have thought. Moon over Soho is centred around a series of suspicious deaths of Musicians within the London Jazz scene that turn out to be have a paranormal influence. Aaronovich is really good at incorporating the history and culture of the regions of London each book explores and Soho and its music scene really shines in this instalment.

ON THE TWELFTH DAY OF CHRISTMAS MY TRUE LOVE SENT TO ME: 12 DRUMMERS DRUMMING.

Drum roll please…what is your favourite read of this year?

This is a near impossible choice. 2020 may have sucked for all number of reasons but on the Bookish front it was amazing. I could name at least 20 books that could hold this spot. So I have picked this one as it has held a top spot as one of the best books I have read all year since January and deserved a bit of a time to shine again.

This is such a book lovers dream book. Bringing to life all the well known classic characters in a fun family focused urban fantasy. It is just a great book and I am definitely aiming to re-read it again soon. You can read my full rave review of it HERE