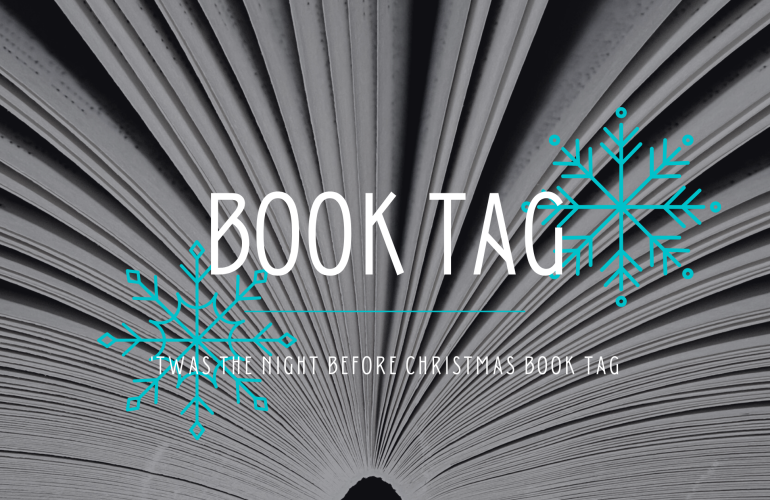 Happy Christmas Eve to all that celebrate it. I know for many Christmas Eve can be just as important as Christmas Day and I know that this year may be a repeat of last years difficulties, having to choose wither to see family or friends, or being caught in travel bans. I hope no matter how you celebrate that you get to enjoy some of your traditions or adapt and create new ones.

A tradition that I will be adapting this year is my families tradition of reading the poem Twas the Night before Christmas. We will be meeting up over zoom this year to read it together. I would also like to share it with you guys as I found the ‘Twas the Night Before Christmas Book tag, originally created by Aoife from Fred Weasley died laughing, last year and again it just had to be my Christmas Eve post.

“Twas the night before Christmas, when all through the house, not a creature was stirring, not even a mouse,”

A book that kept you up so late, everyone else was asleep.

I will say this whole series is unputdownable. I just devoured them all. I listened to them on audiobook as they are written like a true crime podcast and the multi cast audiobooks really made the podcast come to life. I highly recommend this whole series for anyone looking for a book they just cant put down(or stop listening too )

“And Mama in her ‘kerchief, and I in my cap, had just settled our brains for a long winter’s nap,”

A book that made you fall asleep.

The Return of the King (mainly the Sam and Frodo bits)
J.R.R. Tolkien

I loved the first half of this book following Aragorn and his party, Pippin’s Adventures but then I hit the parts when it switched back to Frodo and Sam and lost interest in continuing. It took me almost 9 months to pick it back up again and finally finish it.

“When out on the roof there arose such a clatter,I sprang from my bed to see what was the matter,”

A book, or a book scene that made your heart race

My First Riley Sager book and it had me at the edge of my seat. It was so spooky and gaslighty and had to double guessing everything that was going on. I really loved they way this was told in two perspectives it really added to the creep factor.

“when, what to my wondering eyes should appear,but a miniature sleigh and eight tiny reindeer,”

This book is just so jam packed with magic of all kinds both light and dark, devilish and fun. I loved how smoothly the magic system integrated into the world and also leant itself to some of the best heist sequences I have read. It is just such a fantastic book.

“With a little old driver, so lively and quick, I knew in a moment it must be St. Nick,”

A twinkle-eyed book character that made you happy.

Abigail
What Abigail did that Summer
Ben Aarronovich

Rivers of London #5.3
My Review

Abigail with her Tweenage Sass never fails to make me smile, add talking foxes that act like the are part of a WW2 spy network and some curious goings on on Hampstead Heath and you are in for a fun mini mystery. I love how much Abigail is coming into her own in this series, its great to see characters like her.

“so up to the house-top the coursers they flew, with the sleigh full of toys, and St. Nicholas too,”

A book that made you fly to another land.

Once Upon a Broken Heart
Stephine Garber

This book takes us back to the world Garber built for her Caraval series but we get to see even more of it. It was such a nice nostalgic journey to get to return and then to be treated to more mythology and cultures of this world was so much fun!

“And then, in a twinkling, I heard on the roof, the prancing and pawing of each little hoof,”

A book creature you love.

I went back through my books read this list and there are no new bookish creatures that stand out to me so I had to go back to an old favourite instead. It was the 25th Anniversary of Garth Nix’s The Old Kingdom series this year! It is no secret I love Mogget the Demon/Cat from this series so much so I names one of my cats after him. I am using this purely as an excuse to put up a cute festive pick of him.

And because she is also a bookish named cat, here is Maisie looking festive too

“He was dressed all in fur, from his head to his foot, and his clothes were all tarnished with ashes and soot,”

A character that proves to more than his /her first impression

Wallace is a complete dick at the start of his story and while he doesnt fully redeem himself by the end it is so nice to witness his journey and see the layers peel back till he becomes the person he wants to be. Its such a gorgeous redemption tale.

“He had a broad face and a little round belly, that shook when he laughed, like a bowl full of jelly,”

A book or book character that made you laugh

This book is just delightful. a short graphic novel that is fun for TTRPG/DnD players and pet lovers alike as well as everything in between. It perfectly captures the fun and laughter of both Role playing and the personalities of all the fluffy pals out there.

“A wink of his eye and a twist of his head, soon gave me to know I had nothing to dread,”

A book that makes you feel safe.

You always know what you are going to get with a good Poirot book. I regularly use them to break slumps. There is something comforting knowing you are going to get a well plotted mystery, with a loveably fussy detective. I will be doing an update on my Agatha Christie Project after Christmas

“He spoke not a word, but went straight to his work, and filled all the stockings, then turned with a jerk,”

There is a very large cast of characters and as it is a mixed media novel it does talk a little while to get all the characters straight in your mind but the effort to learn who everyone is is really really worth it! I adored this in every way. Its flows really well and is really a quick read despite all the work it puts you to to figure out who is the murderer.

“Happy Christmas to all, and to all a good night!”

A book with a magnificent ending

Its not just a great ending but an amazing beginning and middle too I loved this book. It hit you right in the feels from the beginning and just didn’t let go. Its the only full novel length story in the series, the rest being novellas, and its worth every page.

One thought on “‘Twas The Night Before Christmas Book Tag”