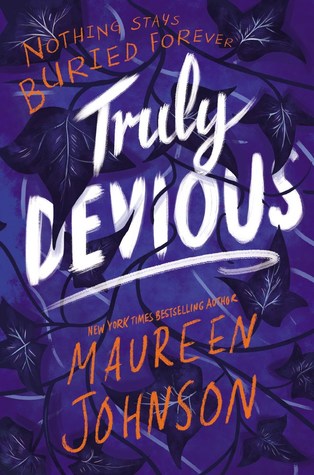 Truly Devious by Maureen Johnson is the first in a truly enjoyable YA Mystery series with a cliffhanger that will leave you desperate for the next book to continue your sleuthing. It is excellently paced, switching seamlessly between two time lines as we try to solve both the mysteries of the past and the echos of those events occurring in the present day.

Set within the grounds of Ellingham Academy, an isolated school for all those that consider learning the ‘greatest game’, we follow two mysteries as they unfold. The first mystery is revealed to the reader as the main character explores it as part of their main area of study. It revolves around the founder of the Academy and eccentric billionaire Albert Ellingham. In 1936 he received a riddle signed only  ‘Truly, Devious’ after which his wife and child went missing on a dark and foggy day that resulted in ransom drops and mysterious deaths. The second takes place in the present day grounds of the school where an apparently accidental death of a student starts to mirror events of the past and our main character is focused on solving both mysteries.

The characters are the true focus of this book. Both those of the past and the present are explored and the cast is extensive and mysterious in their own right. We never truly get to know everything about a single character, instead their personalities and quirks are revealed to us through out the investigations of both the past and modern day mysteries. For example, we are slowly introduced to Albert Ellingham and how his love of riddle lead to the creation of the peculiar academy layout. The academy is a character in itself, with a huge collection of statuary, secret tunnels, man-made lake in both its filled and drained forms and attics filled with the past mysteries. Each character we meet in the past adds more to the mystery as we find they were all holding secrets of their own.  From the tragic Dottie, one of the Academies first students, to the seemingly unusual friendships kept by Mrs Ellingham.

Stevie Bell is our main character. We join her as she starts her first semester of her two years studying true-crime in hopes of becoming an FBI Agent. She is determined to finally solve the Ellingham case and finally reveal who ‘Devious’ really was. She is fantastic. Completely multifaceted in a natural way, she is both strong and sarcastic, while also filled with doubts. She deals with overbearing parents with wildly varying politics to her own, anxiety and panic attacks and the typical teenage angst. She is joined by a diverse group of other students, teachers and staff all of which both add to the mystery as their personalities are revealed but also very real feeling as they both conform to some stereotypes while smashing others.

I was hooked. From the moment of meeting Dottie in her secret reading nook to revealing bits of the mysteries with Stevie I was loving it. First and foremost, I lived for the setting. Give me anything set in a mysterious or magical school and I am there. The description of the library made me want to be there so much. I would have happily read a full book just based on touring the school and all of its ins and outs.

While, it is a mystery novel, the characters are the main focus. The interactions between all the characters both past and present were fantastic and really moved the story along. Honestly, even though I am not a fan of insta-love, I even went with it in this book as it worked well, Stevie being filled with doubt and questioning the motivations, which felt natural. The forming friendships are great and a joy to read as you form attachments to them along with Stevie.

The cliffhanger had me wanting to hurl the book across the room as it really did hit me out of nowhere, despite me predicting it earlier in the book and second guessing myself. We do not get a conclusion to either mysteries in this book, which would usually annoy me but I really loved this and will happily wait on tenterhooks for the next one!

The Vanishing Stair has a proposed publication date of January 2019!