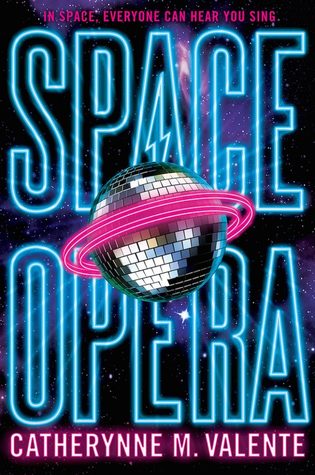 The Hitchhiker’s Guide to the Galaxy meets Eurovision in an over-the-top science fiction spectacle from bestselling author Catherynne M. Valente, in which sentient species compete for glory in a galactic musical contest—where the stakes are as high as the fate of planet Earth.

A century ago, the Sentience Wars tore the galaxy apart and nearly ended the entire concept of intelligent space-faring life. In the aftermath, a curious tradition was invented—something to cheer up everyone who was left and bring the shattered worlds together in the spirit of peace, unity, and understanding.

Once every cycle, the civilisations gather for the Metagalactic Grand Prix—part gladiatorial contest, part beauty pageant, part concert extravaganza, and part continuation of the wars of the past. Instead of competing in orbital combat, the powerful species that survived face off in a competition of song, dance, or whatever can be physically performed in an intergalactic talent show. The stakes are high for this new game, and everyone is forced to compete.

This year, though, humankind has discovered the enormous universe. And while they expected to discover a grand drama of diplomacy, gunships, wormholes, and stoic councils of aliens, they have instead found glitter, lipstick, and electric guitars. Mankind will not get to fight for its destiny—they must sing.

A band of human musicians, dancers, and roadies have been chosen to represent Earth on the greatest stage in the galaxy. And the fate of their species lies in their ability to rock.

I was sold on this instantly. the use of language is extremely reminiscent of Douglas Adams. Adams was my introduction to both Sci-fi and reading in general so this captured me from the get go. It is definitely surrealist and does require the reader to just let go and be swept along by the book. It most definitely will not be everyone’s cup  of tea. It has  the rambling tangent filled nature that Adams fans will instantly recognise the humour is firmly British in nature (Valente definitely understands British humour and our love/hate relationship with Eurovision) .

The Alien races are aplenty and creative throughout this ramp all with fantastically fun concepts. Romp is the best description for this story and I did find that the pace did get a bit grating after a while which made the ending somewhat of a let down. Other than that it is a fun read filled with laugh out loud moments, curious creatures and still manages to keep then 1970/80’s Kitch feeling in a futuristic setting.