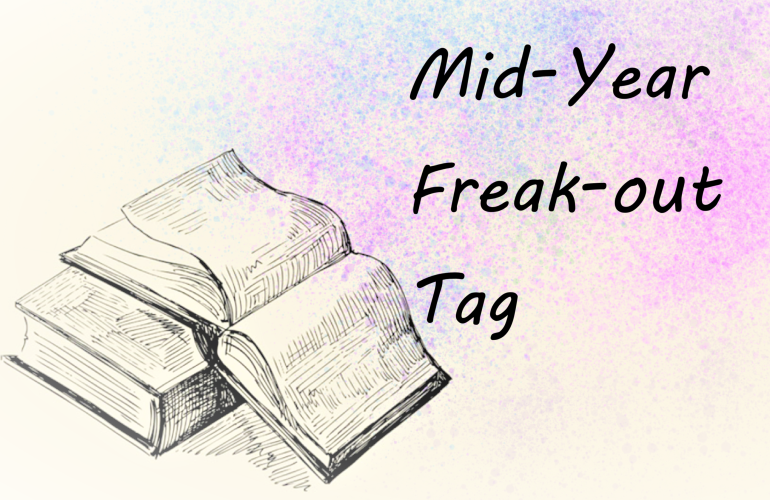 It’s coming close to the end of June and that means we are half way through 2019! That means its time to do the mid-year book freak out tag!

2019 has been an awesome reading year, filled with some truly great reads, i have discovered some awesome authors, dived into back catalogues and re-read my heart out. It’s also been awesome, life wise. My husband and I bought a flat! I finally have my library, a cozy window seat with views out over the city and out to sea and my big reading chair has its own view of a castle and an extinct volcano! What more can a fantasy reader want than to look up form the pages to real life magical sight?

Best reading Month so far: April (Thanks to the O.W.Ls)

Surprise, surprise my most read genre is Fantasy! I am shocked to see that I have read more mysteries and graphic novels that Sci-fi so far this year. I have a number of anticipated Sci-Fi reads sitting on my TBR shelf so I will need to re-address that balance.

As I have read a lot of Fantasy was easy to guess I have been reading a lot of series. There is also a good chunk of ARCs in there which is nice. All the ARCs I have read are from Netgalley and its been nice to see my approval rate go up over the past 6 months, now I just need to read them all!

Again nothing really out of the ordinary within the format that I have been reading. I like the balance I am achieving between all the different formats though I would mention that all my ARCs are eARCs so the ebook value is closer to 34%.

Keeping that 50/50 that I wanted to maintain over the year. I am very happy with all these stats.

It was difficult to narrow down what I would vote for in this section I have rated 13! books over 5 stars (Escape >50). A lot of them were re-reads of my favourites so I discounted them for new reads only. I also removed the sequels as I can discuss them below. So that left me with an easier choice.

Seven blades in black was a sass filled, action packed adventure with some of the best world building I have read. It was an awesome start to a new series and I am eagerly waiting the next. Sykes dark sense of humour really matched mine and despite being a 700 page book the pages just flew by.

Sorcery of Thorns was just so magical! I loved the setting with Grimoires that talk, sword wielding librarians, suave sorcerers and domesticated demons. I was just swept away. I am actually sad it is a stand alone as I would love to have some companion novels exploring some of the of the side characters as all of them were so interesting.

WHAT HAS BEEN YOUR FAVOURITE SEQUEL OF THE FIRST HALF OF THE YEAR?

Interestingly, both of my choices are novellas that I devoured in less than a day each. In an Absent Dream has to be my favourite in the series so far. Set in a logical world it just appealed to me so much . I am enjoying the format of this series of novellas with the even numbered exploring the past and the worlds of each of the inhabitants of the School for Wayward children and the odd numbered returning to the school.
The October man is the 2nd novella in the nine book Rivers of London series (7 books and 2 novellas). Aaronovich has announced that the novellas will take us away from Peter Grant and take us out of London to explore Magical policing from different perspectives. This one took us to Germany with a fascinating little mystery and some amazing new characters who will hopefully show up again.

IS THERE A NEW RELEASE THAT YOU HAVEN’T READ YET BUT YOU’RE REALLY EXCITED TO?

Shame on me. This was my most anticipated release of the year, I even re-read all the previous books in the lead up to the release! I haven’t managed to make time for it yet and I really need to.

WHAT IS YOUR MOST ANTICIPATED RELEASE FOR THE SECOND HALF OF THE YEAR?

Oh there are so many and it was really difficult to narrow it down to just this list but these are the ones I currently have on pre-order. In September the conclusion to Jay Kristoff’s Nevernight Chronicles – Darkdawn. October heralds the release of Leigh Bardugo’s Adult debut with the mystery Thriller Ninth House. Then on the 5th of November, which happens to also be my wedding anniversary, I will have the tough decision wither to carry on with the River’s of London series with False Value by Ben Aaronovitch or dive into the long awaited second novel from the Night Circus (on of my favourite books) author Erin Morgenstern with The Starless Sea.

WHAT IS YOUR BIGGEST DISAPPOINTMENT SO FAR?

I have never hate read a book so hard in my entire life! This is a fictionalised account of the real life events of Pino Lello during the 2nd world war in Italy. It was so promising yet SOOOOO badly executed. The writing was just bad, the dialogue was cheesey and over exaggerated. It just didn’t do justice to the real life events the book was based around. I hope the up coming movie is a little better, but I would highly recommend skipping this one and reading Mr Lello’s son’s blog post on the events of his fathers life instead.

WHAT IS YOUR BIGGEST SURPRISE SO FAR?

The Timekeeper Series by Tara Sim

This series was awesome. I picked Timekeeper up on a whim and I am so glad I did. It just had a little bit of everything from romance to action and drama all with fantastical elements and awesome diversity. It is well worth picking up.

WHAT IS YOUR FAVOURITE NEW TO YOU OR DEBUT AUTHOR?

Both of these books were new to me authors when I read them and as they were two of my favourite reads so far this year I will definitely be dipping back into the back catalogues of both authors.

WHAT IS YOUR FAVOURITE FICTIONAL CRUSH FROM THIS YEAR?

I am not one for book crushes but I have developed a soft spot for Nikolai Lantsov from the Grrishaverse and Nathanial Thorn from Sorcery of Thorns. I guess I am just a fan of witty, sassy talking guys.

WHAT IS YOUR NEW FAVOURITE CHARACTER?

I have actually chosen a team. Tobias Winter and Vanessa Sommer were an awesome match. I enjoyed Tobias’ narrative voice. His love for his job and his professionalism but also delight in having an officially issued flame thrower. While Vanessa is so enthusiastic and inquisitive but with a cruel sarcastic streak that she is a joy to read about.

A BOOK THAT MADE YOU CRY?

There hasn’t been one this year to be honest. it takes a lot to make me cry at a book and it just hasn’t been met yet. The only one that came close to tears of joy for the characters was the graphic novel Heartstopper. It was just beautiful.

A BOOK THAT MADE YOU HAPPY?

Heartstopper by Alice Oseman is just too beautiful for words. it just filled my heart with such joy and I am very much looking forward to reading the next volume.

YOUR FAVOURITE BOOK TO MOVIE/TV SHOW THAT YOU’VE SEEN SO FAR?

Good Omens by Neil Gaiman and Terry Pratchett on Amazon Prime was a masterpiece. Gaiman has really done Prachett proud in honouring his last request in finally bringing this to television. It was so lovelingly faithful to the work updating to make jokes more relevant without loosing their tone. It is very much worth a watch.

The Umbrella Academy by Gerard Way and Gabriel Ba on Netflix actually fulfills the very rare honour of a TV show I enjoyed more than the graphic novel itself. There as aspects of the Graphic novel that the TV show wove more intricately into the plot making them reveals and points of interest and reflection that the comic just gave you without any build up or discovery. They managed to expand the narrative and make it so much larger and emotionally involved for the viewers.

WHAT BOOKS DO YOU WANT TO READ BY THE END OF THE YEAR?

This is always an impossible question to answer as there are so many. I have many unread books and highly anticpated release on my radar that I can never narrow it down. So I would just say I want to keep reading my exisitng TBR and to get to some of the recent purchases I have made. Below is just a small selection.

Well that is my mid year freak out. There is still a lot of time to read the rest of the year. With the Book junkie Trials and Medevialathon in July and the NEWTs in August I am bound to get a lot of reading done.

How has your 2019 reading year going so far? What has been your favourite read so far?
I would love to chat all things bookish with you! You can comment down below or find me on Twitter or Goodreads!