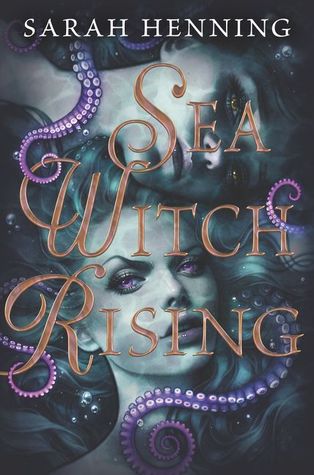 I recently re-read Sea Witch in anticipation of Sea Witch Rising as I had been granted an eARC copy from NetGalley. I never wrote a review for Sea Witch on my first reading, so this is a perfect opportunity to review both. If you want to just read my Sea Witch Rising Review scroll down it starts about half way down.

Everyone knows what happens in the end. A mermaid, a prince, a true love’s kiss. But before that young siren’s tale, there were three friends. One feared, one royal, and one already dead.

Ever since her best friend, Anna, drowned, Evie has been an outcast in her small fishing town. A freak. A curse. A witch.

A girl with an uncanny resemblance to Anna appears offshore and, though the girl denies it, Evie is convinced that her best friend actually survived. That her own magic wasn’t so powerless after all. And, as the two girls catch the eyes—and hearts—of two charming princes, Evie believes that she might finally have a chance at her own happily ever after.

But her new friend has secrets of her own. She can’t stay in Havnestad, or on two legs, unless Evie finds a way to help her. Now Evie will do anything to save her friend’s humanity, along with her prince’s heart—harnessing the power of her magic, her ocean, and her love until she discovers, too late, the truth of her bargain.

This is a mix of a little mermaid retelling (based more on the original Anderson story over the Disney version) mixed with an Ursula origin story. And on the whole it is an enjoyable read if you make it to the end. The last 50 pages are the best aspect of this book. It’s where all the action happens and it makes some fast paced action packed twists and turns.

However, the rest of the book before that ending is slow. I do like the historical aspects and research that lend some world building to the story but there is no real development of the setting out with the use of the historical knowledge. The characters are also fairly flat as well. I did initially enjoy the friendship between Evie and Nik, it was refreshing to see a male/female friendship that was not laced with an undercurrent of romance but as I predicted that was short lived. The main four were just bland even to the point where they became indistinguishable from each other.

When it came to the writing, i actually preferred the flashback sections as they were the only points within the first 300 pages of the book that moved the story forward and gave it some action. The rest tended to be very much Evie worrying about her status as a lower social class than her friends and that she might be found out as a witch without any forward momentum on either issue.

It was an enjoyable read and the last few chapters were solid and exciting but middle of the road for the rest so the highest I can rate it is 3 stars.

I received a free eARC copy from Harper Collins UK , via NetGalley in exchange for an honest review. All opinions are my own.

“The Little Mermaid” takes a twisted turn in this thrilling sequel to villainess origin story Sea Witch, as the forces of land and sea clash in an epic battle for freedom, redemption, and true love.

Runa will not let her twin sister die. Alia traded her voice to the Sea Witch for a shot at happiness with a prince who doesn’t love her. And his rejection will literally kill her—unless Runa intervenes.

Under the sea, Evie craves her own freedom—but liberation from her role as Sea Witch will require an exchange she may not be willing to make. With their hearts’ desires at odds, what will Runa and Evie be willing to sacrifice to save their worlds?

Told from alternating perspectives, this epic fairy tale retelling is a romantic and heart-wrenching story about the complications of sisterhood, the uncompromising nature of magic, and the cost of redemption.

I have to admit I enjoyed this one more than the first in the series. The story overall was more engaging and I do feel we got a wee bit more insight into the merworld and the magic system that was missing from the first book. However, this book still had its faults.

Like the first book the plot of this one changes into a completely different story for the second half and it is that half that is the most entertaining with most of the action. And again the first half was somewhat boring, even a little run of the mill. Its the little mermaid story mixed with the Frozen, sisters saving sisters storyline, that has no real thrill to it. We can already predict what is going to happen.

The second half is where this book gets interesting. This seems more like the story Henning wanted to tell and I don’t know why this had to be a series as this would have been perfectly fine as a stand alone. In fact the prologue contains a great recap (I wish more books did this) of the first in the series that you could just read this one on its own and be more that satisfied with the series.

Again its just lacking a bit of the page turning excitement to continue reading to move it up the the star ratings so it is a solid 3 stars, it entertains but doesn’t make it to the top books read list.

STYLE AND PACE OF WRITING – 5