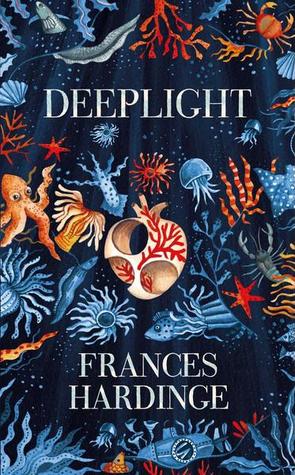 I received a free eARC copy from Pan MacMillan , via NetGalley in exchange for an honest review. All opinions are my own.

For centuries the gods of the Undersea ruled the islands of the Myriad through awe and terror: they were very real, and very dangerous. Sacrifices were hurled into the waters to appease them, and every boat was painted with pleading eyes to entreat their mercy. They were served, feared and adored. Then, thirty years ago, the gods rose up in madness and tore each other apart.

Now, none remain. The islands have recovered and the people have patched their battered ships and moved on.

On one of these islands live Hark and his best friend Jelt. To them, the gods are nothing but a collection of valuable scraps to be scavenged from the ocean and sold.

But now something is pulsing beneath the waves, calling to someone brave enough to retrieve it.

Frances Hardinge is a master at worldbuilding. This is a rich full world filled with history and lore, so different from our own. It is completely encapsulating, dark, to the point of being chillingly creepy at times. It is very intriguing making you want to learn more and more about it. The characters are as skill fully fleshed out with complex stories and actions.

The plot itself is focused around realising that friendships can also be toxic and dangerous in the most fantastical of settings, but the setting is not whimsical it suits the dark subject matter perfectly. Ancient sea monsters, absent gods, scavenger gangs and unreliable friends, all mixed into one. It can be slow to get started but once you find yourself engrossed in the world it really speeds up and you will find those pages flying by.

A beautiful part of this book was the integration of deaf characters, many of the inhabitants of this world were deaf or had partial hearing, including a major character. The MC himself uses sign language to communicate with his friend.

It is a enjoyable read. I would also recommend it, while marketed as YA would also suit advanced Middle grade readers. I think they would find the message important and the world dark and exciting.