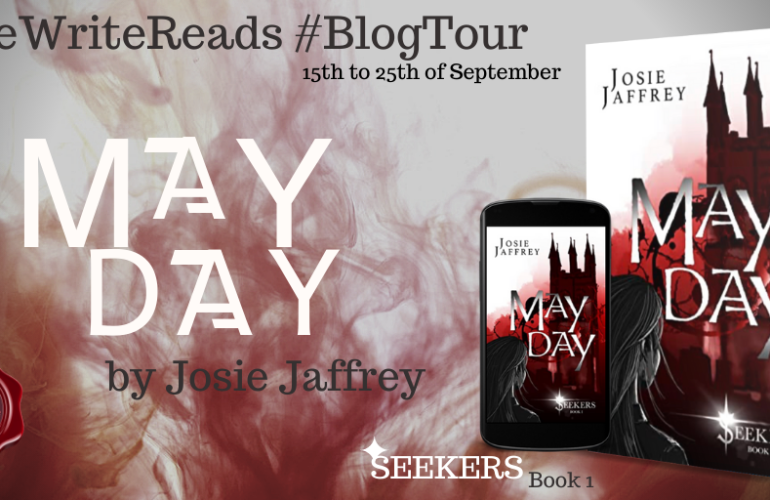 I received a free ARC copy from the Author and in conjunction with The Write Reads Tours in exchange for an honest review. All opinions are my own.

If the murderer you’re tracking is a vampire, then you want a vampire detective. Just maybe not this one.

It’s not that Jack Valentine is bad at her job. The youngest member of Oxford’s Seekers has an impressive track record, but she also has an impressive grudge against the local baron, Killian Drake. When a human turns up dead on May Morning, she’s determined to pin the murder on Drake. The problem is that none of the evidence points to him. Instead, it leads Jack into a web of conspiracy involving the most powerful people in the country, people to whom Jack has no access. But she knows someone who does. To get to the truth, Jack will have to partner up with her worst enemy. As long as she can keep her cool, Drake will point her to the ringleaders, she’ll find the murderer and no one else will have to die. Body bags on standby.

May Day is the first book in Josie Jaffrey’s Seekers series, an urban fantasy series set in Oxford, England.

This book includes a number of trigger warning provided by the Author on the last page of the book.

This book pulled me in from the start. I love a good detective story… a paranormal detective story doubly so. Jaffery does an excellent job of combining the two. I really loved the choice to set this in Oxford moving away from the London centric urban fantasies. This allowed for an interesting dynamic of the college set up to be integrated into a vampiric society and for me it worked really well. What I really enjoyed is that while learning about the functioning of this society, its rules, regulations and customs it never felt info-dumpy. All the character were well established they had been vampires for decades and were well accustomed to there way of living so it didn’t have the “we are learning as the MC is learning” feel. The flow of information establishing it all just felt more natural.

I liked that we came into a world where most of the character’s had long standing relationships with each other. Again this helped with the worldbuilding but also made getting to know each of them very easy through the MC’s thoughts and actions towards them. The team of Seekers (Vampire/Silver detectives) had a very collegiate feel to it. They worked so well together you easily knew the established hierarchy and how this would serve the investigation. I really enjoyed they way they communicated with each other, the various types of friendship and how they looked out for each other. I really liked Jack the main character, she was a great personality with a lot of depth and variation. It was a lot of fun reading from her perspective. I really enjoyed her dark sense of humour, but also her self confidence.

I adored the love triangle which is not a trope I usually like but this one was fun and interesting. It really built up some of the lore in the world and set up some great cringe moments for Jack! I think it will be really interesting to see where that goes in the rest of the series. The Mystery plot was stand out. It had a lot of intrigue, twists and turns that branched off and really left you questioning. I like how naturally the over arching mystery for the series was set up in conjunction with the murder investigation for this book. I like that there was a resolution of the Murder case while also setting up something so much bigger and more dangerous for Jack in the future. I also appreciated how dark this got and that this was both human and vampiric characters that made my skin crawl.

I just really liked this book. I enjoyed with writing and the pacing as well as the story and I am definitely looking forward to carrying on with the series. I have yet to read the prequel short story but will be picking it up asap.