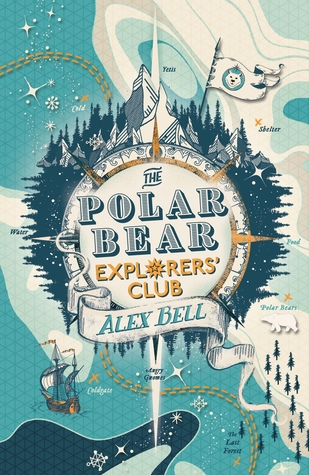 It sounded like a respectable and worthy enough death for an explorer – tumbling from an ice bridge to be impaled upon a mammoth tusk – but Stella really, really didn’t want that to happen, just the same.

When Stella and three other junior explorers get separated from their expedition can they cross the frozen wilderness and live to tell the tale?

This was delightful. I loved reading this. It was just so inventive filled with imagination and with some awesome kick ass characters building some great friendships along the way. We had everything from pet Polar bears, pygmy dinosaurs, ice princesses and carnivorous cabbages.

I adored how creative it was, delving effortlessly into the absurd and playing with it to tell a story that covered family, friendship, loss and grief and guilt. It was a great escape kind of reads where you just get absorbed into the world.

I really enjoyed the characters. Stella was strong-willed without being the stereotypical bossy-pants. Beany was sweet and sincere and Ethan can be a bit selfish and arrogant but is also kind of venerable. The adults are great too. When we get to over hear their conversations they and fierce and protective but also loving and supportive parents.

It is a fantastic middle grade which is probably more to the younger age range, I would say it would be perfect for an 8/9 year old but can really be enjoyed by all ages. I would happily continue with the series though I do hope there is more of Felix and I really enjoyed his character.