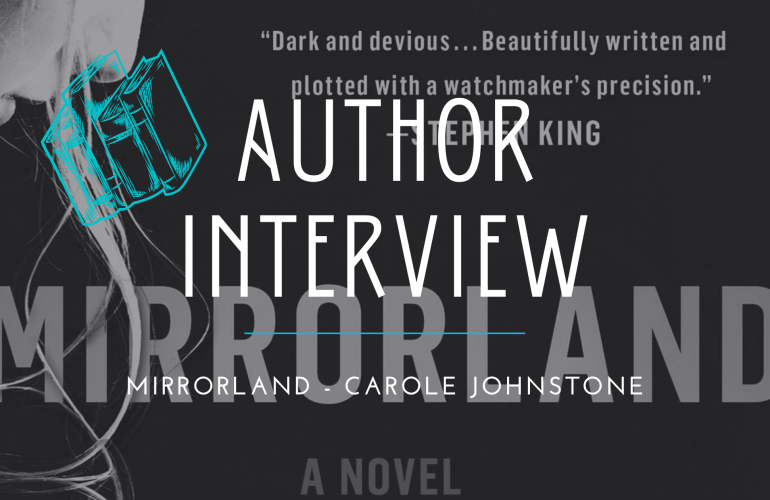 I was lucky to be part of the Write Reads Blog Tour for Mirrorland, and I loved it. So when I got the chance to ask Carole some questions I jumped right too it.

Carole Johnstone is an award-winning writer from Scotland, whose short stories have been published all over the world. Mirrorland, a psychological suspense with a gothic twist, is her debut novel.

Having grown up in Lanarkshire, she now lives in the beautiful Argyll & Bute, and is currently working on her second novel: a very unusual murder-mystery, set in the equally beautiful Outer Hebrides.

With the startling twists of Gone Girl and the haunting emotional power of Room, Mirrorland is a thrilling work of psychological suspense about twin sisters, the man they both love, and the dark childhood they can’t leave behind.

Cat lives in Los Angeles, far away from 36 Westeryk Road, the imposing gothic house in Edinburgh where she and her estranged twin sister, El, grew up. As girls, they invented Mirrorland, a dark, imaginary place under the pantry stairs full of pirates, witches, and clowns. These days Cat rarely thinks about their childhood home, or the fact that El now lives there with her husband Ross.

But when El mysteriously disappears after going out on her sailboat, Cat is forced to return to 36 Westeryk Road, which has scarcely changed in twenty years. The grand old house is still full of shadowy corners, and at every turn Cat finds herself stumbling on long-held secrets and terrifying ghosts from the past. Because someone—El?—has left Cat clues in almost every room: a treasure hunt that leads right back to Mirrorland, where she knows the truth lies crouched and waiting…

A twisty, dark, and brilliantly crafted thriller about love and betrayal, redemption and revenge, Mirrorland is a propulsive, page-turning debut about the power of imagination and the price of freedom.

Check out my Review

Mirrorland is set in Edinburgh – primarily around Leith and Granton areas, what
made you choose these areas of the city as the backdrop to your characters lives?

Originally, I’d planned on setting the book in the middle of nowhere, maybe the Highlands, and in a vast, dark mansion aka The Haunting of Hill House, but when I first sat down to outline the plot, I just kept seeing my grandparents’ house in Leith, Edinburgh. It was a 200-year-old Georgian villa, and it was just the most eccentric and cool house. My sister and I spent a lot of our childhood here, and many of the elements of 36 Westeryk Road in Mirrorland were pretty much lifted wholesale from my memories: the weird rooms crammed full of mismatched antique furniture; the dining room of thrones; the servant bell-pull system; the creepy covered alleyway and washhouse that in the book became Mirrorland itself—even the floor plan of the house is exactly the same.
Perhaps I subconsciously wanted to write about what I knew, but I think mostly it just always felt right. The house in Mirrorland is like a weird character all of its own—and I thought it felt creepier that there it was in the middle of an overcrowded and busy capital city, but it was entirely a separate world all of its own.

Mirrorland as the girls imaginary land is such an inventive concept, how did the
idea of that imaginary world first appear to you?

Thank you! I actually had a dream about it! I knew the geography of Mirrorland as a concept—where it would be in the house and how the sisters would get access to it; again mostly from drawing on my memories of my grandparents’ house. But coming up with what Mirrorland would actually be was a lot harder! I spent a long time thinking about it, and then I had a very vivid dream of a pirate ship inside a small stone building at midnight, with all sorts of weird and wonderful characters hiding in the shadows. It felt a bit like Tim Burton’s Alice in Wonderland, that kind of vibe: terrifying and dark, but also wild and different and fun. After that, I just kept channelling Tim Burton every time I added new aspects to Cat and El’s own world!

You have set out a very weaving and complex plot filled with well placed reveals
and twists. How did you go about constructing that narrative. Did you have to plan it
all out or did you let the story set the pace?

Thank you again! I definitely planned it out. And then once I’d done that, I planned it out some more—which is not an exaggeration! I’m a bit of a planner in real life, and it definitely spills over into my writing. I’ve been writing short fiction for more than ten years, and my best stories are definitely the ones I outlined first—it just seems to work for me. In the early days I just couldn’t finish a novel, either because I’d go off on distracting tangents that didn’t move the plot forwards, or the story would just become this huge unwieldy beast that didn’t know what it wanted to be.
Mirrorland is full of clues and secrets, with a lot of twists and turns throughout. Some of those reveals come quite early on in the story, so I had to prepare for them straight off the bat. I really wanted to make sure that not only did all the reveals make total sense, but that the reader, if they wanted to, could go back and find all of the clues leading up to each reveal—that every single thing would come together and no threads would be left untied.
I needed therefore to be in control of the story from the very start. I needed to know not just the beginning, middle, and most importantly the end, I needed to know exactly what was going to happen at every single point along the way.
I ended up spending about four months just planning, researching, and outlining to the nth degree the whole Mirrorland story, which is roughly about as long as it took to write the entire first draft!

In your acknowledgements you thank a number of experts of all kinds from sailing
to forensic pathology. Do you feel it is important for writers to get the details right and
why?

Definitely. I spent 20 years working in the NHS, and I used to end up yelling at movies and TV shows that depicted stuff I knew just wouldn’t happen! Yes, fiction is primarily making things up—and I’ve definitely used artistic licence more than once to suit the plot—but a writer owes readers the best story possible; it has to make sense, it has to seem real.

Of course, it’s impossible to become an expert in everything that you write about, but I’ve been so surprised by how many people who are experts have been willing to talk to me, to help me. I’ve been able to ask very specific (and often bizarre!) questions, and get answers that no amount of googling would ever have found.

Do you have any writing ritual? Can you tell us a little about your writing process?

My writing rituals are pretty dull! I can’t stand noise or interruption, so I always work in my office at my desk—I can’t even write in the garden as I get too distracted! I wish I could block external things out, but I’ve never been able to. I do listen to music, but mostly classical, especially movie soundtracks, and never anything with lyrics.

I can’t write in short bursts either. So, for example, at the moment I’m editing my second book while outlining my third, and promoting Mirrorland. But I find that I have to concentrate on only one of these things each day—if possible. Especially when I’m writing, it can often take me a couple of hours before I really start being productive, which can be a little frustrating if I have a lot of other deadlines and responsibilities. I’ve always been so envious of writers who can sit down anywhere and just work, and on any number of projects at the same time—the slightest thing will put me completely off my stride!

What are some of your favourite reads? Do you think any have influenced your
writing?

Growing up, I adored all the Gothic classics like Rebecca, Jane Eyre, Beloved, Wuthering Heights, The Haunting of Hill House, The Turn of the Screw. I love a dark and creepily atmospheric setting. I love love triangles. I love buried secrets and shocking mysteries that aren’t fully revealed until the final pages.

Even in contemporary fiction, I’m pretty drawn to the same gothic vibes. Sharp Objects by Gillian Flynn is just fantastic, as is Jane Harper’s wonderfully atmospheric whodunnits set in the Australian Outback, like The Dry and The Lost Man. And I’ve always loved pretty much anything by either Margaret Attwood or Stephen King!

I’ve also always been a big Agatha Christie fan, particularly standalone novels like And Then There Were None, which is my absolute favourite. I’ve been very influenced by whodunnits in terms of my own writing too—the darker and more devious the better!

I loved getting a chance to ask about all the details that went into writing Mirrorland. I am an and Edinburgh redsident myself so I am really glad she choose to move it to the city. As a Scientist I really appreciated the attention to detail. Carole is right, you will be amazed the fun and bizarre things experts can teach you if you just reach out and ask! If you haven’t checked out Mirrorland I strongly recommend you do.